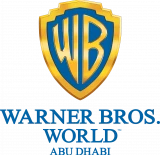 Warner Bros World Abu Dhabi is an indoor amusement park in Abu Dhabi, United Arab Emirates, owned and developed by Miral Asset Management. The park features characters from Warner Bros’s franchises, such as Looney Tunes, DC Comics, Hanna-Barbera, and others. The park is opened on 25th June 2018 and it is located on Yas Island near Ferrari World and Yas Waterworld. It will be the third Warner Bros.’s theme park

“What makes it special is its immersive nature. Usually in theme parks you will go to the ride area which are very highly themed and interactive, but when you’re done from that area and step back into the park again you’re out of that world,” said Mark Gsellman, general manager of Warner Bros World Abu Dhabi.

“When you walk out of Gotham City you walk into Metropolis, so there is no break, you’re constantly being immersed and surrounded with things constantly happening around you,” he added, explaining how the theme park’s six areas keep visitors immersed into the world of their favourite characters.

Mohammad Khalifa Al Mubarak, chairman of the Department of Culture and Tourism – Abu Dhabi, and chairman of Miral, said the theme park would appeal to visitors of all ages.

“The great thing about this theme park is that it’s a park for everybody. There are other theme parks where half the kids can’t go on the rides and the other half are bored, and so this is something for everybody,” Al Mubarak said. (Source: Gulf News)

To contact us, you can call our offices or fill out the demo form.